Several years ago, my son Kendahl introduced me to what is now one of my favorite television shows. The British sitcom, Keeping Up Appearances, was written by Roy Clarke and ran from 1990 – 1995. However, today, the programs are repeated worldwide on PBS and entire series are sold on Ebay and Amazon. 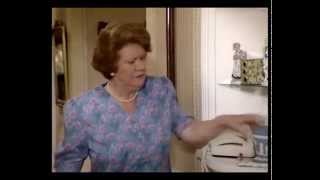 In trying to analyze why I’m so drawn to this silliness, I look at the characters and their behaviors. Patricia Routledge is cast as Hyacinth Bucket, insisting that her name is pronounced “bouquet.” Her two sisters are Rose and Daisy, so maybe she would have valid claim, except for Hyacinth’s consistent snobbish ways.

She is an eccentric middle-class social climber. Hyacinth is married to Richard who patiently endures her escapades. She brags about her candlelight suppers and tries to impress everyone by flaunting her material possessions, like her “Royal Doulton china.” All the while, Hyacinth says, “I don’t have a snobbish bone in my body.”

Her superiority in climbing the social ladder to the upper class is usually dashed by the reality of her lower-class extended family. Rose is a “loose” woman; Daisy is a complacent dreamer, married to a likeable, but poor slob, Onslow.

Maybe I like Keeping Up Appearances because I see my prideful self in this program. It’s much more acceptable to see a similar behavior in another and then laugh about it.

Once I was too proud to go to an event with a small run in my panty hose. I ended up buying a new pair at the drug store and getting into the back seat of my Honda to change. Soon, I discovered that the child safety locks were on. I was trapped. I twisted and turned and forced my body into a tiny crawl space between bucket seats to eventually plop into the driver’s seat. Someone must have recognized me in the Walgreen’s parking lot, “On the corner of Healthy and Happy.” I live in a small town.

Silly, the situations we get ourselves into. All due to pride. “Pride goeth before destruction” (Proverbs 16:18). It happened to the brightest angel in heaven: Lucifer.

How can you look and laugh at your own silliness when it comes to pride? Are you struggling with “Keeping Up Appearances” in an area of your life? Sometimes it’s just not funny. I know. Tell me your story.

2 Responses to Keeping Up Appearances