I credit my first-born son with that quote. It’s distorted a little, but then, I’m just following my own motto. Actually, Kendahl said, in jest, “I can do anything, until they find out I can’t.” In all fairness, he was referring to his job skills at age 22 and a recent college graduate. 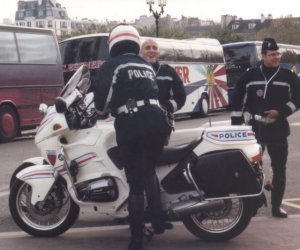 I took my motto in 2001 to Paris where a friend, Sharon B., and I slipped into an expensive gallery that hadn’t had its grand opening, yet. We sauntered into the business behind a delivery man. As he was preoccupied, we browsed, looking at expensive artwork, furniture, and fancy lighting. “Do What You Want…Until…”

Sharon noticed a guest registry on a beautiful cherry wood desk, so we picked up a pen and signed our names and addresses. Proudly, we signed from the USA. Giggling at our cleverness, we took several pictures of the items all around us, including the guest register.

By this time, we had aroused the owner. She stood on an upper balcony shaking her finger at us while the security cameras got it all on tape. In French, she said something that sounded a lot like angry curse words. We smiled and said, “Pardon,” in the best accent we could muster. Now, Sharon is French, but her language is just enough to fool a few tourists.

Needless to say, we left the exquisite shop promptly with the owner’s words still ringing in our ears. But Sharon and I had experienced some fun on a little lark and no harm was done. We had to run to catch up with my sister Mynita and another friend, Diane K. They had gone on down the sidewalk, pretending not to know us. In case you’re wondering, the police never came; none of us were arrested.

In my novels, Foxtrots and Foxholes and The Unveiling, a few characters display this same kind of spontaneity. In this  2012 New Year, I hope you’ll take a few risks, too. Be careful, though, and don’t blame me when you get into a jam. Instead, say, “Merci beaucoup!”

Thank you! Now, I leave you with this caveat, “I don’t suggest that you disobey any of the 10 (or 613, for my Jewish friends) Commandments.” When we keep them sacred, the grand opening is called, “Abundant life.” Everyone is Welcome!

In finding that no one can keep God’s law, we have an escape: Messiah Jesus. He didn’t break any of the Commandments. He said, “I am the door,” and invited everyone to enter. He won’t kick anyone out, either. (Paris and the rest of the world are owned by Him.)

8 Responses to Do What You Want…Until