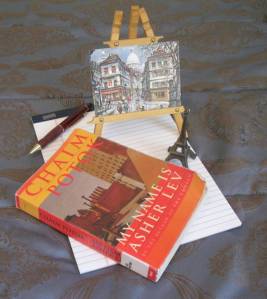 When he was still alive, one of his admirers was Elie Wiesel. He wrote to Potock and said that he’d read all of his books with “fervor and friendship.” I’ve recently discovered Potock’s My Name is Asher Lev, and I’m awed at the author’s skilled craftsmanship.

Raised by Polish immigrant parents in the Bronx, New York City, Potock started writing fiction at age 16. He wrote from his Hasidic roots and never traded or sold them out for his artistic passions. Contrasted to the fictional Jakie Rabinowitz, a.k.a. Jack Robin, in The Jazz Singer (1927), coming from a long line of cantors, he chooses career and a female relationship over his family bonds and religion. Yes, Chaim Potock has earned my admiration for a number of reasons.

He gives G-d (as written by observant Jews), Ribbono Shel Olom, and “Master of the Universe” credit for the special artistic gift granted to the protagonist, Asher Lev. The moral struggle he faces is attributed to a conflict with evil, sitra achra and “The Other Side.”

He shows how artists can learn from the masters. In the case of Asher Lev, he learned from the great Jewish artists, Chagall, Modigliani, Soutine, and Pascin. Asher Lev also visited the old studio of Picasso at Montmarte in Paris. At one of the museums, Asher studied a picture of Jesus. His eyes moved across it. The wounds intrigued him. “I wondered what it felt like having wounds like that,” he said.

I wonder, too. The entire account is written in another book, the Bible. No other book in the world has ever out sold it. Not even Chaim Potock’s novels or the current New York Times’ best seller. I love fiction, but God’s Truth surpasses my wildest imagination.

For 2012, I highly recommend a daily reading of the chronological Bible. My sister, Mynita, and I just finished the ones we bought a year ago. What a blessing…and thank God for books! Thank Him for life! Incidentally, that’s what Chaim means. So, L’Chaim! To Life!

4 Responses to The Rabbi’s Fiction